When you go for decades with doctors telling you there is nothing wrong, you think it’s normal—you learn to live with it.

On a misty May morning, Lisa heads out to the backyard to make sure her hostas have enough water. Even though they have already bloomed this spring, she continues to take meticulous care of her plants to make sure they thrive in the future.

Each year her perennial garden comes back bigger and stronger, withstanding frequent attacks from deer and extreme weather. This resilience is a reminder of her own drive to survive. “Like the garden, I keep emerging,” she says. “I want to fight and get stronger.” Lisa reflects their fortitude in spite of the many challenges to her health. In 2015, at the age of 49, she was diagnosed with Fabry disease, a condition that she experienced symptoms of for most of her life, but only recently received a diagnosis.

Gardening is a great way for Lisa to get outside, although the heat and humidity are not easy on her. Hailing from Jamaica, Queens, she and her siblings have always struggled in summer weather. Lisa, her three brothers, and a twin sister all rarely perspired, causing their bodies to overheat. “My sister and I would often pass out,” she remembers. “We didn’t understand what caused it. We would feel this numbness all over our bodies, and then just lose consciousness.”

Family was important to Lisa growing up. She always had a special bond with her youngest brother Micah, who was born with autism. Micah was never verbal and had many of the behavioral struggles typical of being on the spectrum. However, the two had a special bond. “I got through to him,” she recalls. “We could understand each other pretty well.”

Micah and his two brothers experienced frequent bouts of pain in their hands and feet—something that Lisa and her fraternal twin sister also began to experience as they got older. “The doctors always just said it was ‘growing pains’,” she recalls. “It was also common knowledge that many people in my family just didn’t sweat much.”

Fabry disease is an X-linked disorder, its prevalence is widespread in Lisa’s immediate and extended family. Despite the numerous signs indicating that something genetic might be happening, for decades no one was tested for any genetic conditions. With no one urging Lisa’s family to test, it meant they had to learn to live with the pain.

“It became my normal and I managed to move on with my life—marriage, family, working full-time,” says Lisa. “When you go for decades with doctors telling you there is nothing wrong, you think it’s normal—you learn to live with it.” Her inquiries remained inconclusive. “One doctor even told me it was ‘all in my head’.”

When Lisa hit middle age, things only got worse. “Once I turned 49, the pain really started intensifying. I got more tired. My hypertension got very bad. I struggled with walking and balance.” Lisa remained active by raising her two children while maintaining a social life in the city. However, her symptoms suddenly intensified and became increasingly difficult to live with.

Lisa first heard the word “Fabry” in 2014, from a cousin in South Carolina who had visited an ophthalmologist who noticed corneal dystrophy (whorling) in her eyes. He suggested that she get tested for Fabry, and the results came back positive. The news spread to the rest of her family. Lisa’s twin sister, who had recently suffered from transient ischemic attacks and strokes, tested positive for Fabry disease.

“I didn’t have a full understanding that it was genetic,” says Lisa, who was hesitant to get tested. Her twin had always experienced different and more severe symptoms. Could she possibly have the same disease?

However, within the next year, Lisa’s symptoms intensified and on bad days, left her fully incapacitated. Everyday tasks became risky. Once at the laundromat, she tried to walk to the clothes dryer, but fell to the floor and could not get up. She called her husband, Alden, for help, but an onlooker had already dialed 911. An ambulance arrived to take her to the hospital. Lisa was discharged with a walker, but without answers. She decided it was time to test.

When Lisa learned she had Fabry, so did several other family members, including her brothers, her mother, and several cousins. “The diagnosis was bittersweet,” she acknowledges. “It answered questions about the ones who passed away: two cousins with kidney disease and others from heart failure. But it was a relief to finally know what the cause of the issues was.” Now, with a name, came the struggle to manage the disease and start to get her life back. 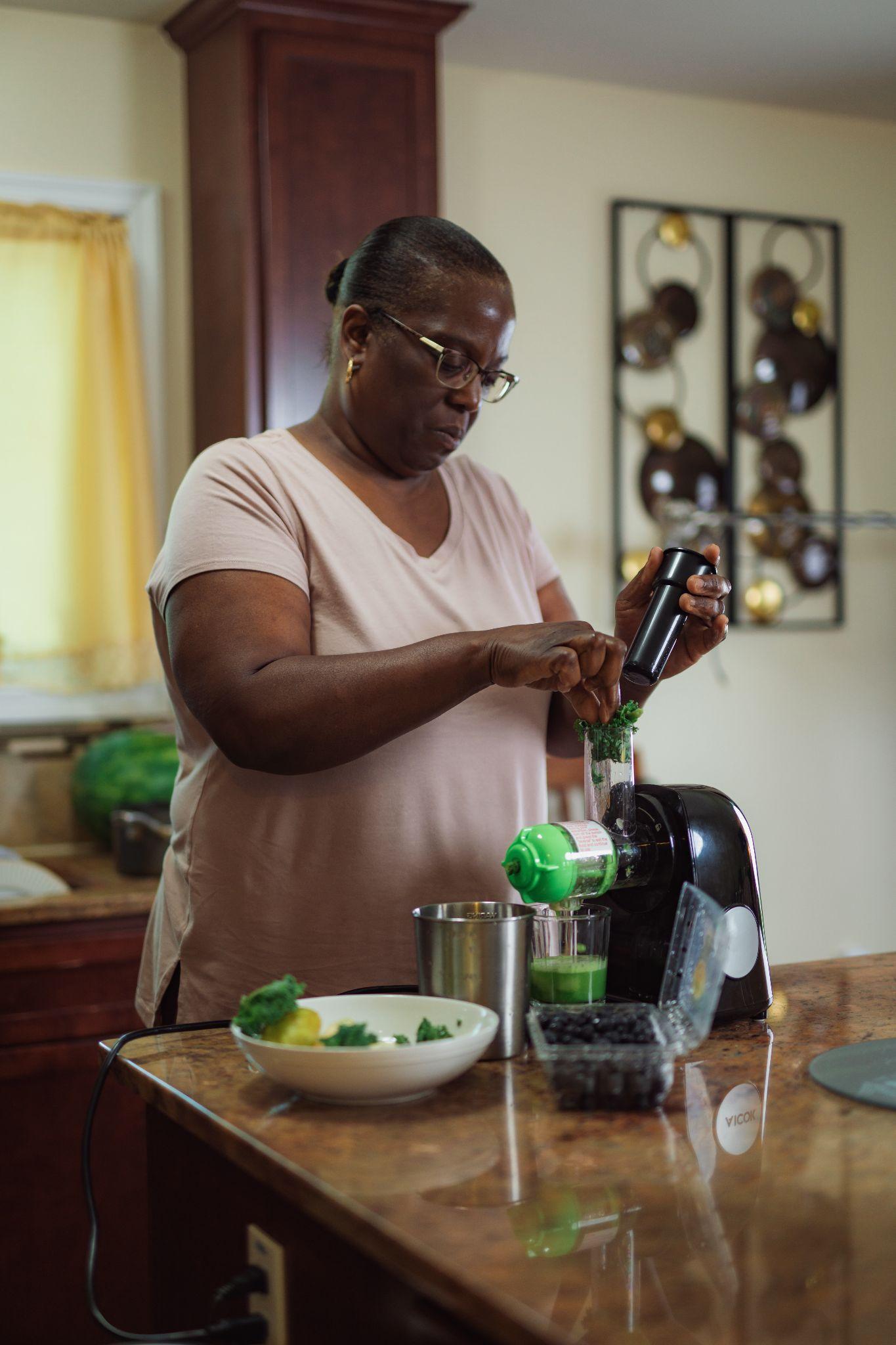 Further challenges arose around the time of Lisa’s diagnosis. She and her family had just recently relocated from New York City to rural Pennsylvania. With the move to a new state, came the shifting of healthcare providers, which still is an ongoing challenge. “I have to travel over two hours, either to Philadelphia or New York, to see a doctor for my Fabry,” she says. Additionally, moving to a rural community, away from family and friends, made the experience of living with Fabry acutely isolating.

It was difficult, but Lisa figured out how to get to her regular doctor’s appointments. She changed her diet to be mostly based on fruits and vegetables and made other lifestyle changes.

Lisa struggled to pay for the medication to treat her disease but fortunately, she reached out for help from a patient assistance foundation and received much-needed financial support.

Sadly, even after receiving a diagnosis and learning how to manage her Fabry, Lisa would continue to face heartbreak from health emergencies. When the COVID-19 pandemic first emerged in New York City in the spring of 2020, the members of her mother’s household were all infected. Lisa’s father quickly became seriously ill and was admitted to the hospital. Lisa traveled to the city to await her father’s return, but he never did. “I didn’t get a chance to see him before he passed, because he was hospitalized.” His absence continues to be felt every day.

Micah, who still lived at home, was also infected with COVID and struggled to fully recover. His kidney function declined rapidly, and he soon started emergency dialysis. When Lisa’s mother fell and fractured her hip in 2021, Lisa sprang into action, returning to Queens to offer help. However, that summer Micah’s condition took a turn for the worse. His doctors tried to get him listed for a kidney transplant, but the process was challenging.

Lisa stayed in Queens to care for him, however things only became more difficult for Micah and her. She put her own needs aside to care for her family members, including deprioritizing her own health and managing her Fabry disease. She missed doses of her medication and was not getting proper rest. She started feeling bad and needed to return home to take better care of herself. Five days later, her sister called her with the news: Micah had passed. “In my heart I was hoping that he would be able to pull through,” she relays. “He was tired. He wasn’t able to communicate with us. It was hard to watch.”

With grief still fresh in her heart, Lisa continues to take the steps she needs to take care of herself and her family. Neither of her two children have Fabry. Her son lives at home and her daughter lives back in New York City. They are growing into young adults—living without the pain that she knows too well.

Alden takes Lisa’s hand as the two go out for a short stroll near a local pond. The chirping of frogs mixes with the splashing of waterfowl, as the couple enjoy the ease of living in the countryside, away from the hustle and bustle of the big city they once called home. They have been together more than 25 years, and have navigated many challenges together, although they still can’t agree on what to watch on TV.

Alden’s support has been vital to Lisa through the many difficult transitions of the past decade. “After diagnosis, when I was battling a rare disease that was new to me, he helped me out a lot,” she says. “I had good days and bad days, but he always stayed by my side.” 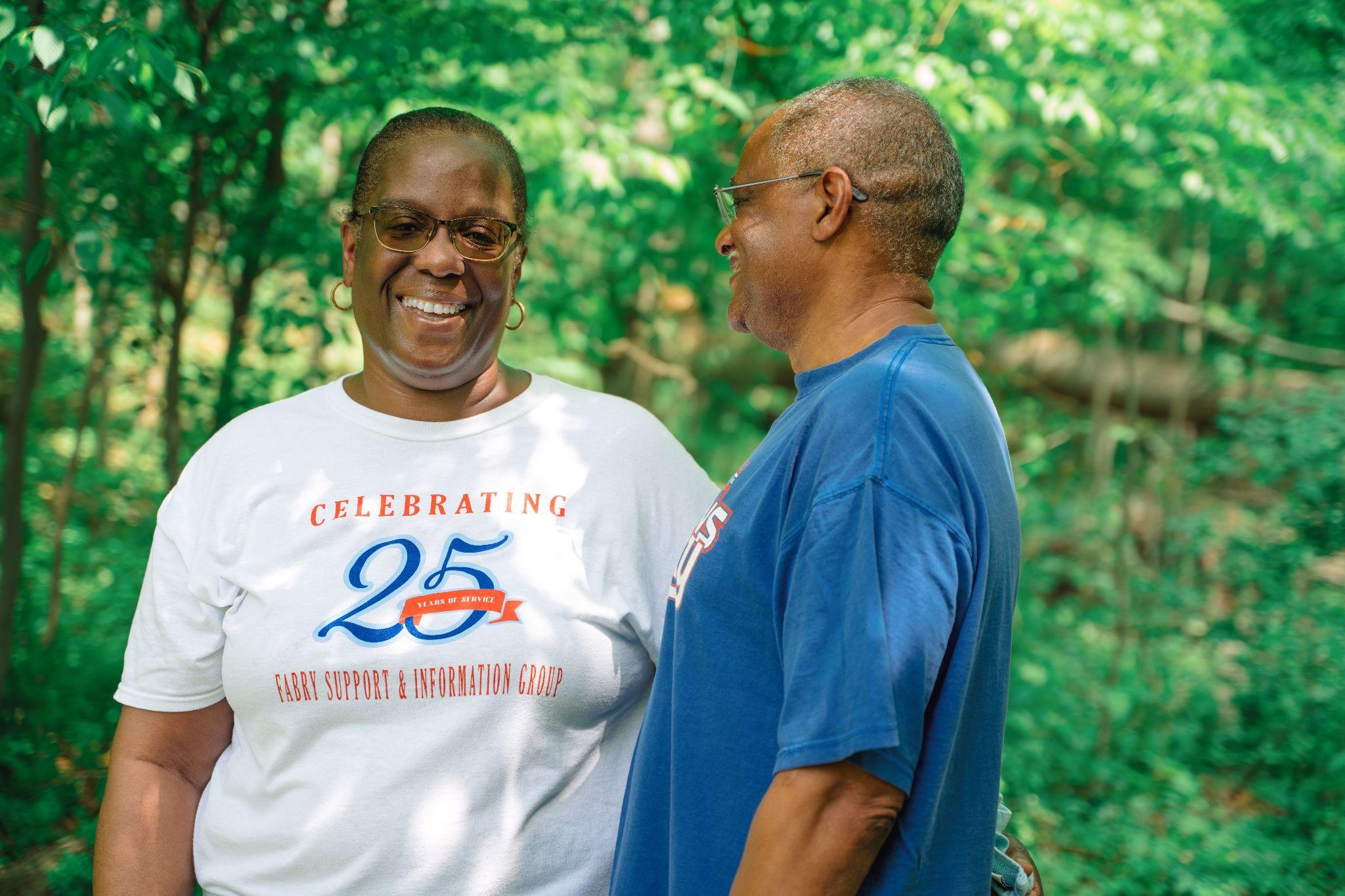