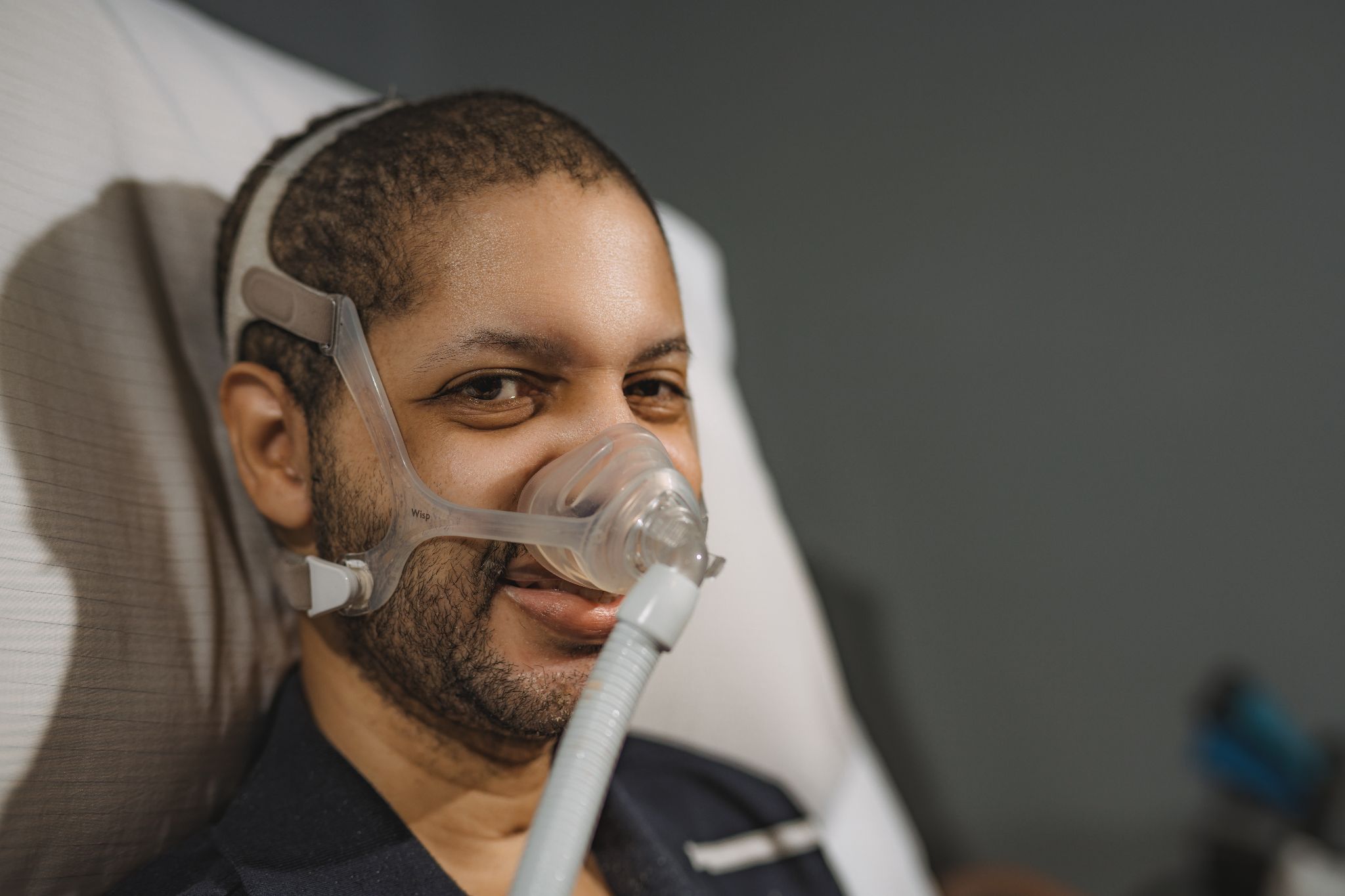 Kody sits up straight against the raised back of his bed, his hands gripping onto a video game controller as his eyes follow the action on screen. Laughter echoes off the walls as he trades quips with team members and opponents. The sound of Kody’s breathing passing deeply through a ventilator lays an audible backdrop and steady rhythm to the room. The mask that he wears day and night to deliver pressurized air through his nose, though a constant presence, cannot hide his smile and bright eyes.

With a mission completed, the headset conversation takes a real-life turn. Kody, now 43, talks with someone who has been going through a tough time. Kindly he gives her advice—to look beyond the challenges and poverty that surrounded her for a better future. It is an experience that resonates with him. As one of the oldest members of his “digital family”, as Kody calls them, he uses many of the experiences he’s been through to try and help a younger generation

Kody’s interest in gaming started as an escape. When life outside of his Atlanta apartment—on the streets and at school—became too rough, he found respite in his fascination within the worlds that digital devices contain. He came of age during the early years of home consoles and has since witnessed the progression of the gaming industry.

When online gaming first debuted in the late 2000s, Kody began meeting people virtually and started forming lasting bonds with others like him. “There were people I met there, as early as 2009, and I still talk to some of them now.” To him, they truly are family. “We share major life events and occurrences. It’s just like any other friendship, but we happen to live far away.”

Kody’s love of gaming serves a purpose that might have not seemed obvious when he was a child, but has grown with him as his body has changed over the years. He lives with Pompe disease, a rare genetic condition that deteriorates the muscles of his body as he ages. Now in his 40s, his mobility is severely limited. Kody spends most of his days in his room—in bed. 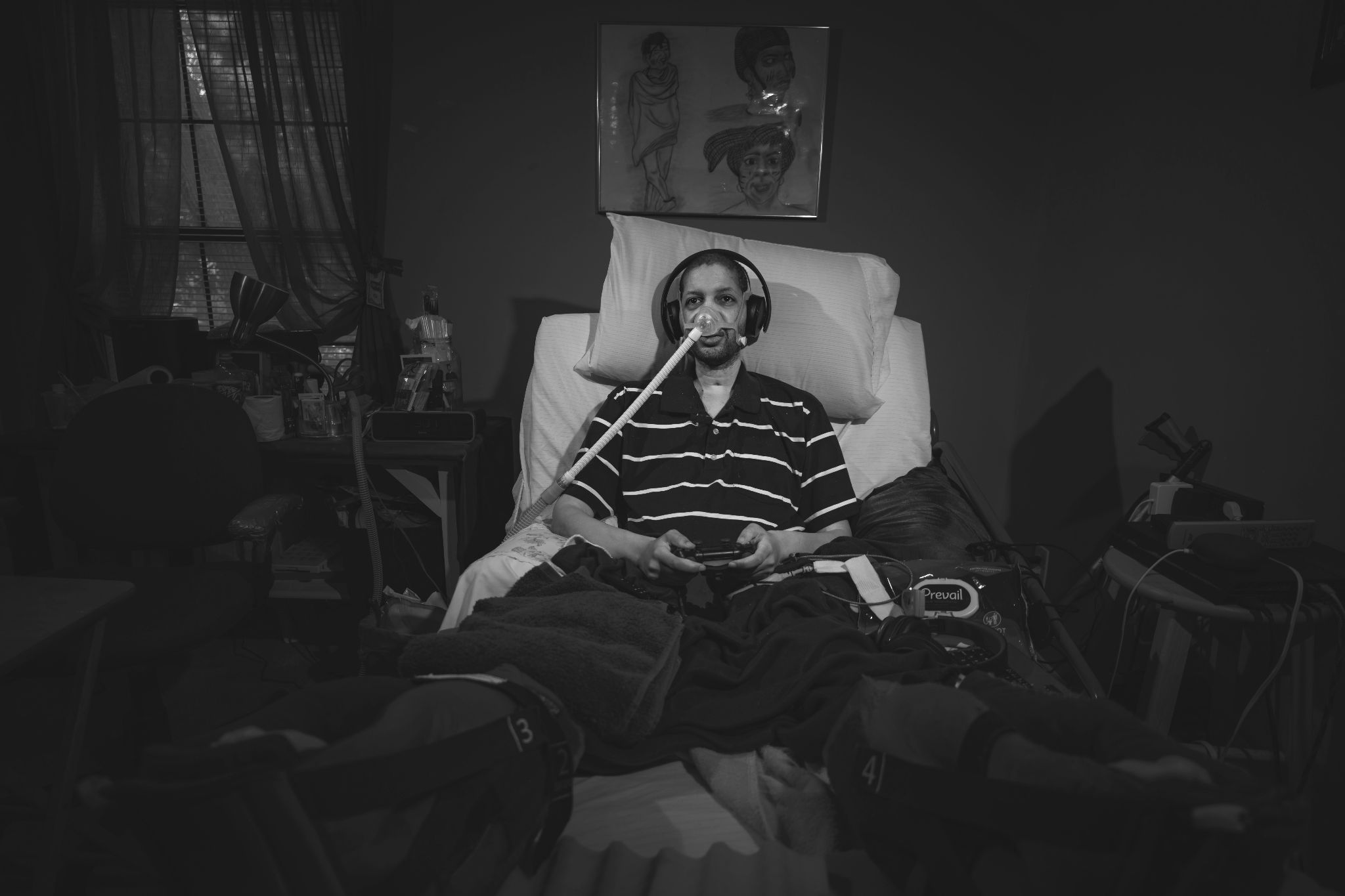 “The most difficult part of Pompe disease is the isolation,” says Kody. “Even when I was mobile, it still put limitations on where I could go, or it has made it more difficult, cumbersome, and expensive to go places because I need more equipment.”

Up until a couple years ago, Kody was still able to walk short distances around the house to get his basic needs met. “By March of 2020, it became very difficult. I felt like I had weights on each one of my limbs,” he recalls. Kody normally used objects around his room to help him get out of bed and make it to the bathroom, but one morning, that approach broke down. He could no longer hold himself up. He called his mother to come help. “I had to put almost all of my weight on her,” he remembers. “I noticed that my leg was still collapsing. I was like ‘that’s it.’ I can’t put all this pressure on her, my leg can’t take the pressure, so I guess that’s it for me and walking for now.” 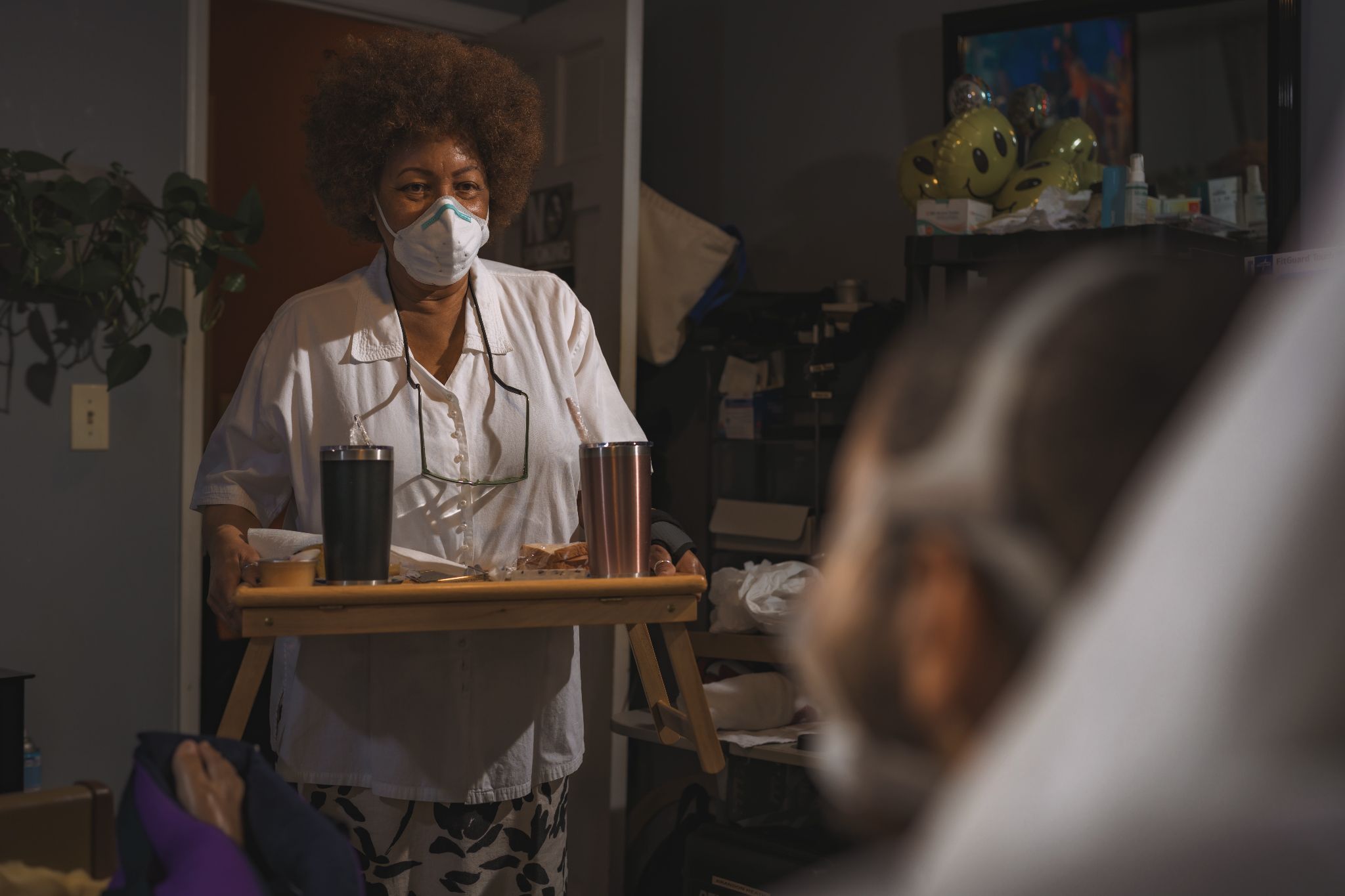 Daisy, Kody’s mother, is his primary caretaker. Being in her 70s, Kody is quite cautious in asking her to help move him—something reserved for emergencies. His mobility situation is compounded by other factors, namely not owning a power wheelchair or living in a place that is accessible to using one.

Regardless of these challenges, Kody spends his days surrounded by loved ones. A knock at the door reveals his sister, Duchess, who carries his dog, King, in her arms. The small dog jumps onto Kody’s lap and nuzzles him lovingly. Duchess helps take care of the dog, something Kody is eternally grateful for. In fact, she suggested adopting King, knowing well that her brother would not have the ability to take care of him on his own. To say the least, her work has paid off. “He has been everything I could hope for and more,” says Kody, smiling. “He is perfect, obedient, unconditionally loving. He has helped me fight off depression, just having him around.” 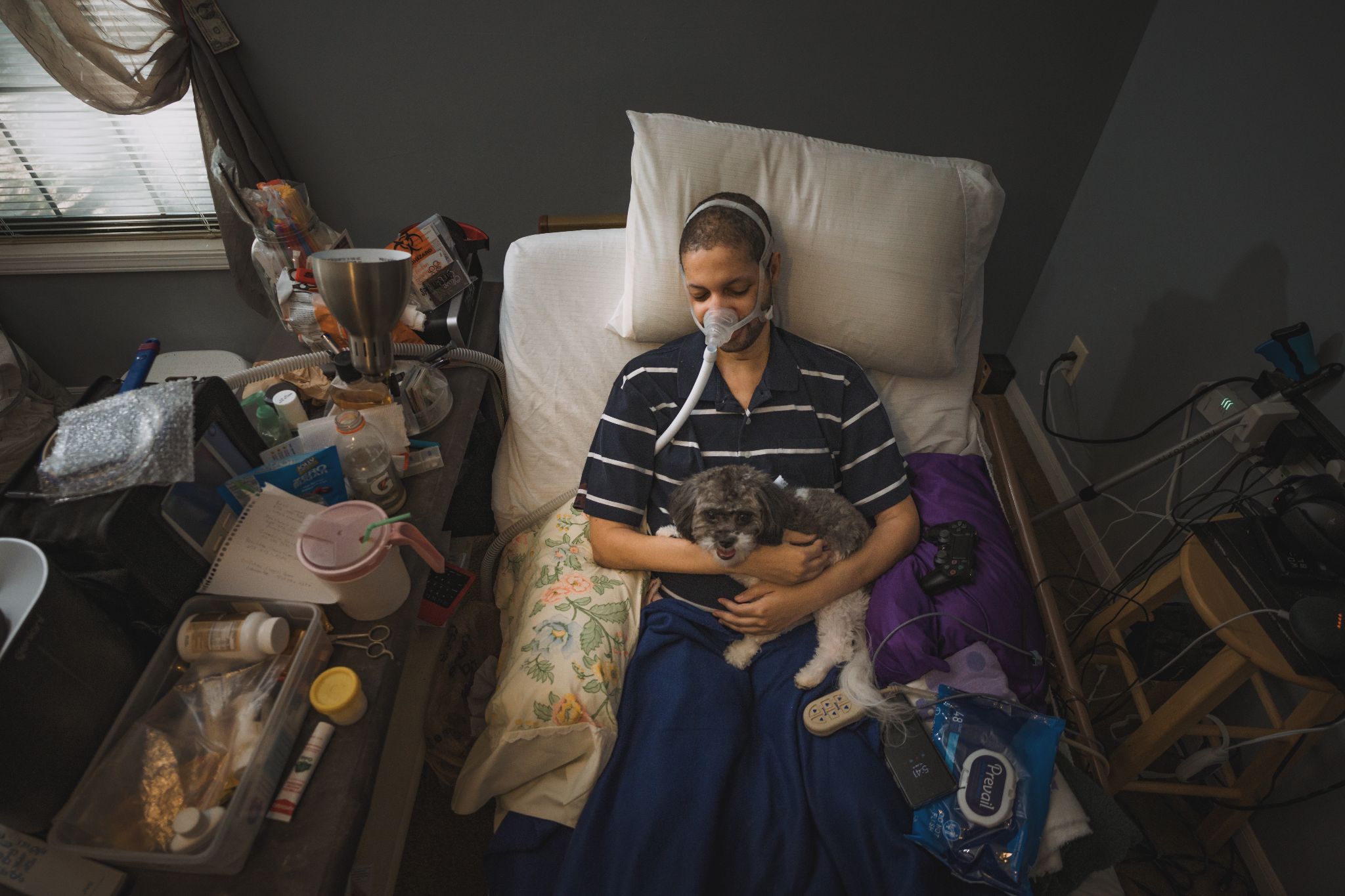 From his dog to God, finding emotional support is crucial to Kody feeling mentally and emotionally well each day. Every morning Kody wakes up and listens to his audio bible and prays. “I’ve had enough experiences when I’ve prayed, waited for the answers, and then received. Some took longer than others… that’s saved my life on multiple occasions.” He has fought waves of depression, especially since the onset of the COVID pandemic in 2020.

Since then, he has barely left the house, and spends most of his days with Daisy, watching TV, playing games, and enjoying the home he shares with his mom. “My mother plays and has always played a huge part in my life,” says Kody. “Even when I was mobile, we always had a tight bond and connection.” Additionally, Daisy helps him throughout the day, bringing him meals, and making sure his medical equipment is working correctly.

Kody’s journey with Pompe started when he was young and couldn’t keep up with his peers in gym class. Some people thought he walked funny. This did not help his social standing at school, where he found himself the target of frequent bullying. Upon entering adolescence, he began to have trouble going up and down stairs, which led him to a neurologist, eventually taking a muscle biopsy. The biopsy was hard on Kody—it took three months for him to recover—and in the end he was diagnosed with Pompe disease.

Over the next several years, Kody watched as his body began to change in ways that made activities of daily life harder. He began using a cane. Not only was his body changing, but the world around him, built for the able-bodied, was becoming more difficult to navigate. “Pompe disease to me is a unique curse like no other,” he relays. “This might sound rough but imagine that you have freedom and then you’re caught and forced into slavery. You can remember what freedom was like, but you no longer have that and some days it looks and feels like you’ll never have that freedom again.” 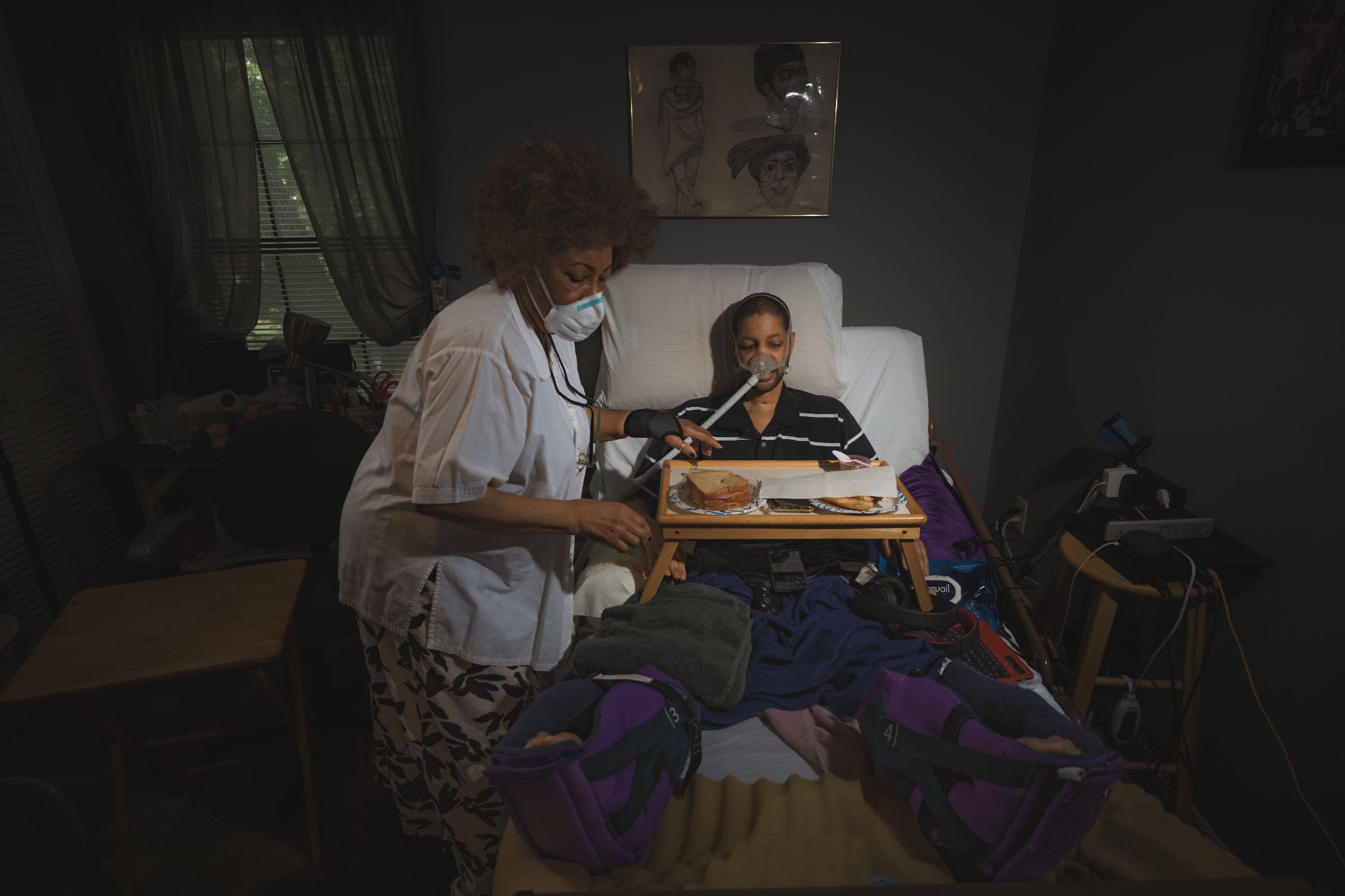 For Kody, Pompe disease symptoms have been amplified through the lens of society; one that has regularly excluded him. In high school, Kody fought back against his tormentors, and soon he noticed how bullies would leave him alone. He carried this confidence with him into college, defining himself as an individual who would not let his circumstances dictate the outcome of every situation. He attended the Art Institute of Atlanta, studying videography, and worked in the field in the following decade.

With the help of treatment accessed by participating in a clinical trial, Kody was able to withstand his condition for a number of years without significant decline. However, in 2012, he suffered from respiratory arrest and was rushed to the hospital. This initiated a new phase in the type of medical support he would need. He began using ventilation and has continued ever since wearing his portable ventilator hose virtually all day and all night.

As Kody’s body continued to decline in the following years, he began seeking support from the Pompe and muscular dystrophy communities. He became involved with the Muscular Dystrophy Association (MDA) and the United Pompe Foundation, which have helped him in difficult situations. The financial burden of the disease has been real, and Kody has turned to online fundraising and crowdsourcing numerous times to get his bills paid.

Meeting others with Pompe has also helped ease some of the isolation he felt and opened the doors to telling his story. Armed with little more than a cell phone camera, Kody began taking to YouTube in 2020, providing an intimate look at Pompe from his perspective. He believes by sharing his story, we can take one small step toward providing better treatments for people living with Pompe and other rare diseases.

As his condition has advanced, Kody has taken a step back from his own situation to face the larger picture. From the bottom of his soul, he desires nothing more than for others with Pompe to be healed. “I want this disease to be spoken about in the past tense,” he muses. “That’s what I want for everybody else—for this disease to be a distant memory.”