“One of the reasons we work so hard to keep her going is the hope that there will be something that will fully fix this,” says David. 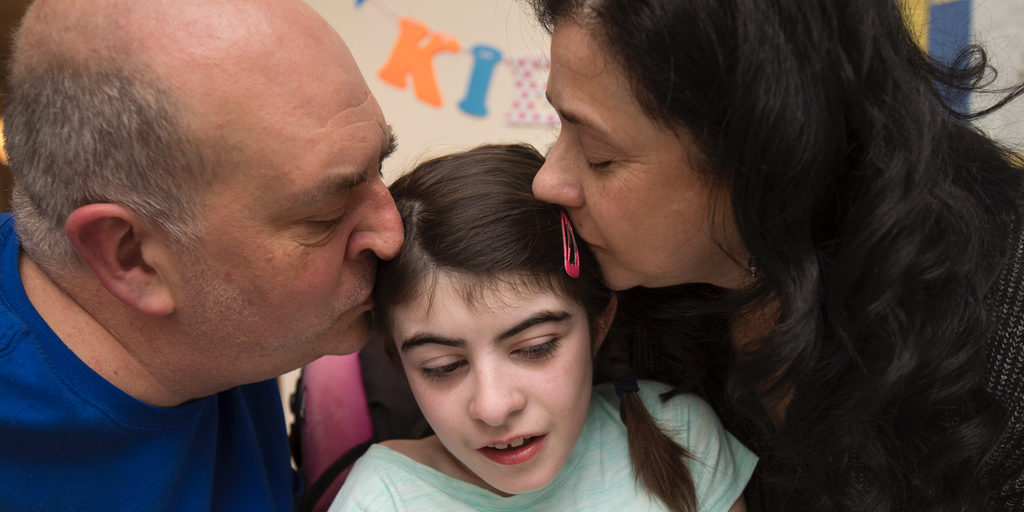 Music is the first thing to rouse Kiera today. Her groggy yawns and outstretched arms come as a welcomed gesture to her parents who alight with their daughter’s awakening. Behind her lie the multitudes of machines monitoring Kiera’s health, moment-to-moment. The beeping of the EKG builds a slow cadence as her heart rate increases—the tempo of a new day, and the next act in what, at times, can be a harrowing portrayal of a rare disease.

The parents have been bedside for nearly a week in the PICU of the university hospital. “This is the first time we’ve been in the ICU, or had anything like this,” explains David, Kiera’s father. Kiera’s recent hospitalization is a disturbing new chapter in her battle with CDKL5 deficiency (cyclin-dependent kinase-like 5). “Her baseline is having these tonic-clonic seizures,” explains David. “It’s quick, violent, and severe… She normally has two-to-seven of those a day.” She was diagnosed with CDKL5 right before her third birthday, after over a year of investigation in an attempt to understand why she had been having regular seizures starting at eight weeks old.

Her current state however, was almost unfathomable a month ago. “Kiera is a beautiful girl,” says Katheryn. “She has pale skin, but she’s always had these bright red and pink lips—to the point where people would come up to her, when she was one or two years old, and ask if we put lipstick on her.” However, a little over a month ago, Kiera’s notably pink lips had started to fade. Then, a school nurse put an oxygen saturation monitor on her, and found that her O² levels were sporadically dipping to an alarming 60%. Seemingly out of nowhere, she had begun suffering from acute bouts of apnea. They called Katheryn, who contacted Kiera’s neurology team, and they recommended that she go to the ER. A day later, she was transferred to the PICU and has been there since.

Katheryn and David are continually astounded by Kiera’s musical urges, and see it as an underlying admonishment to the world to listen to her. “It’s the music, the emotion, the communication,” says David. “She doesn’t have a lot of words she can say, but if it’s in music, she knows all the words.” “Singing uses a different part of the brain then talking,” says Katheryn. “I always tell her teachers to incorporate music in any way they can. She learns through music.” Kiera is able to recite entire musicals, but has difficulty speaking a single sentence, making it hard to find an appropriate education plan. “She has some words,” relays Katheryn. “She can express herself using sign language or gestures. Her receptive language is really good, but she can’t express herself to show what she knows.”

Suddenly an alarm goes off and the RN rushes into the room. Kiera’s O² levels have dropped again. Her eyes gaze downward and her chin falls forward and she becomes seemingly unaware of the activity around her. Katheryn is quick to grab the oxygen tube and, she fights to convince Kiera to breathe. “Come on Kiera. Come on baby, you can do it,” Katheryn pleads. The chorus of encouragement gets her through and within 30 seconds, the alarms quiet and Kiera resumes normal respiration. These episodes of apnea continue throughout the day, along with a few tonic-clonic seizures. Strangely many of these episodes haven’t registered on the EEG, meaning that the seizures are perhaps occurring very deep in the brain, possibly at the brain stem.

The mysteries of Kiera’s condition, and of CDKL5 in general, have challenged these two doctors. “I think the hardest part is just not being able to rapidly figure something out,” David laments. “That’s my job. I have to figure out a treatment for a patient. I think that’s been the hardest challenge. I’ve not been able to figure out something that really helps Kiera that much.” David spends much of the day by Kiera’s side in bed, talking to her, caressing her, and feeding her formula, sip by sip. When he’s not by her side, he is in conversation with Katheryn, trying to figure out what combination of drugs, or other procedures will help bring Kiera out of the fog.

The heightened emotions of the day and Kiera’s instability ebb and flow, but as the sun begins to set, Kiera is staying awake for longer intervals and gains energy. She gets into her stroller for a wheel around the floor, to see the autumn colors in regalia out the window. “GO!” she yells, and her parents perk up when they hear their favorite sound—the voice they know and love. And her personality begins to show: her exuberance, her love of motion, and her desire for connection. The hospital staff gathers around to partake in the joy of Kiera’s expressions. They blow bubbles for her, making her squeal with delight, as she reaches out to give high-fives. But alertness eventually gives way to a more quiescent state. Kiera stops blinking her bright brown eyes and begins to stare into space. Immediately, the alarms on her O² monitor begin to wail. The cycle continues.

Katheryn walks over to the windows as the sun sets on the Michigan horizon. “I tell her about the earth, the moon, and the stars. Honest to god, she looks at the moon…and she’ll go ‘woooow.’ She looks so happy. That’s what I want to share with her. The wonders of the world.” In this spirit of sharing the many wonders of life, Katheryn and David have worked tirelessly to support other families with CDKL5 as well. They co-founded the International Foundation for CDKL5 Research, raised funds for investigational therapies, and promoted several “Centers of Excellence” at top hospitals around the country, which now specialize in CDLK5 and related disorders, bringing whole teams of physicians together to work on treatments and study the progression of the disease.

This research brings a much needed dose of hope, knowing that potential new therapies could alleviate many of the problems that Kiera faces today. “One of the reasons we work so hard to keep her going is the hope that there will be something that will fully fix this,” says David. “We also know the reality, that in her lifetime, this might not happen. So we focus on quality of life. That’s our primary focus virtually every day.” 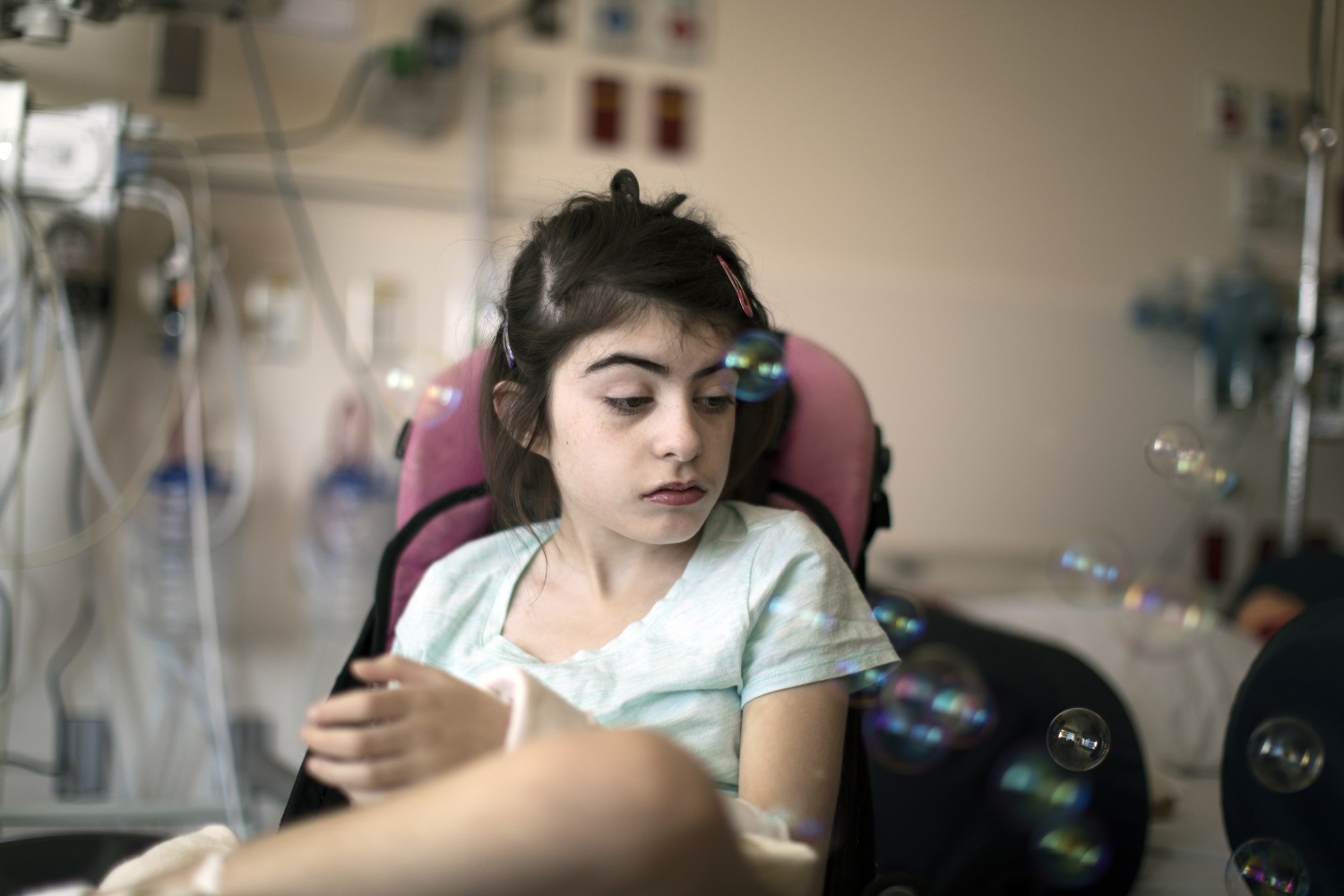 And all considering, Kiera is in remarkably good spirits as we say our goodbyes. I cross my arms over my chest in gesture to ask for a hug. Surprisingly, Kiera’s arms reach out and her hands wrap around my neck in a gentle embrace. I thank her sincerely and reflect her smile with my own. The positivity of her caretakers, the nurses in the ward, and of course, her parents have had a notable effect today, and Kiera shows her appreciation. “At the end of the day, I want her to know that I gave her my all,” says Katheryn. Holding eye contact and smiling toward her mother, Kiera makes it clear that she does.

For the PICU staff, Kiera’s situation was unique. “They have never seen this presentation in any kid—with any disorder,” says Katheryn. “They’ve never used these treatments on a child in this scenario.” The difficulties of discerning treatment protocols rests in the fact that CDKL5 is a newly discovered syndrome.

Far from being intimidated by their surroundings, David and Katheryn are quite familiar with the confines of the PICU as well as the complex science involved in understanding Kiera’s condition as both parents are themselves doctors. David works in Hematology and Immunology while Katheryn was an ER doctor. Since Kiera’s diagnosis almost ten years ago, they have been thrust into a perilous balancing act between their medical practices and the duties and responsibilities of being a parent to a child with a ferocious and, at times, all-consuming disease. Katheryn switched to parenting full-time and stepped out of the ER, while David continues to practice medicine. In a seamless blend of realities, they switch between playing the physician and the parent, tending to Kiera, discussing treatment options, and praying for a return to health.

Kiera remains sedate for the time being, occasionally lifting her head up. She finally sits up and motions toward Katheryn’s tablet, a beloved object, and begins to search the screen for soothing music. It becomes clear that despite her hindered verbal abilities, Kiera’s will to communicate, to be heard, and to understand the world around her, is profound.

“Kiera loves music. Always has,” says Katheryn. “She especially loves going to musicals. There was a point that we were in a clinical trial in New York, once a month, and so we’d spend the weekend going to Broadway shows. It was her treat.” “And ours too,” adds David. With Kiera’s influence the family has gone to see countless shows, deepening their collective love of musical theater. While David has continued to work full-time to support the family, he regularly looks forward to each weekend, when he and Kiera can hang out. “Weekends are really our time together. We just go do things on our own. It’s awesome. I very rarely think about medicine. I’m just a dad. The weekends are all about how can I make her laugh—how can we have fun?”