Mike, who has transformed his challenges into encouragement for others, is determined to continue his experience to expand public awareness about Pompe. 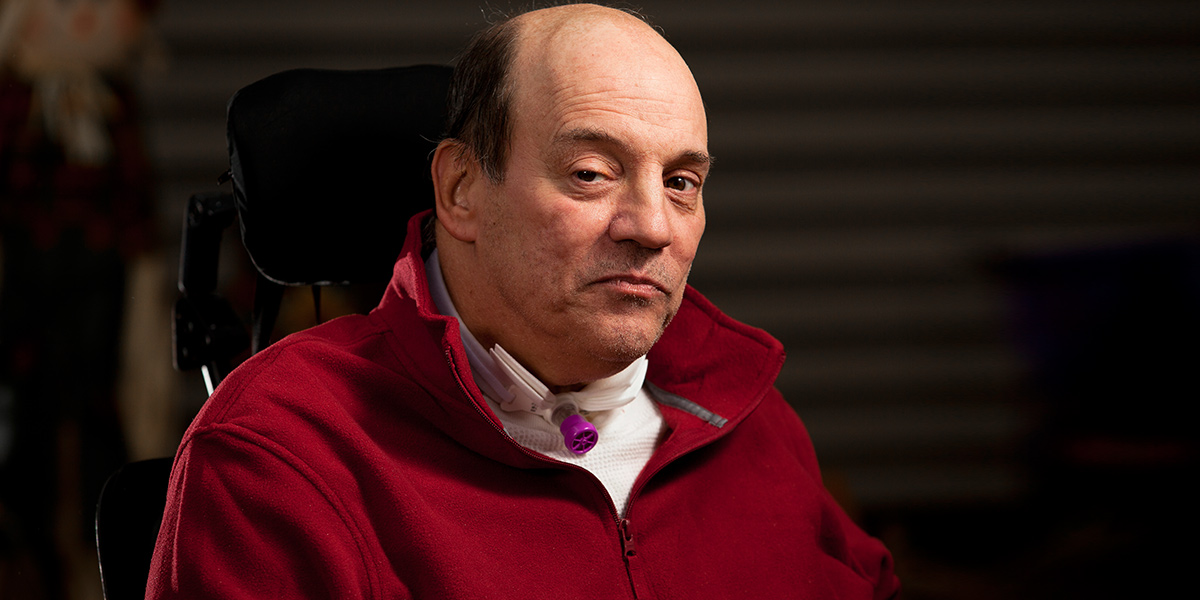 In March 2007, Mike was rushed to the emergency room after experiencing severe difficulty breathing. “I remember thinking they would give me a pill and I would be home in a few hours.” Instead, Mike was admitted to the hospital and told that he may never be able to return home again.

Leading up to that critical night, Mike had been misdiagnosed for nine years with Polymyositis, an inflammatory muscle disease that causes painful weakness and loss of muscle mass. However, it took until his third muscle biopsy, performed in the hospital in 2007, to be accurately diagnosed with Pompe disease. Having gone untreated for almost a decade, Pompe had debilitated the skeletal muscles of Mike’s diaphragm that allowed him to breathe. In order to stay alive, he received an emergency tracheotomy and was placed on a ventilator in intensive care. Four years later, when his son, Brian, was getting ready for his 8th birthday, Mike was still in the hospital.

“Four to eight, those are some big years to miss. I kept thinking, I can’t stay in here the rest of my life; I have to get home to my son.”

In addition to Brian being a big incentive to return home, Mike heard from a friend about a device which was being used to help spinal-cord injury patients breathe on their own by stimulating the diaphragm. For Mike, the logic was simple.

“Pompe is a muscular dystrophy disease and the diaphragm is a muscle. Since mine didn’t work on its own, I wondered if this device could help me get off the ventilator and return to my family.”

Once the idea had sparked, Mike and others did everything they could to make it a reality. In August 2011, Mike became the first person with Pompe in the world to receive a diaphragm pacing system. While this system may not be for suitable for all patients, it has enabled him to breathe independently for the first time in more than four years and return home to his wife, Debbie, and their son. Mike is now known as a trailblazer within the Pompe community; regarded for his strength and determination to battle the odds while helping to initiate a new procedure. Looking back on all the years when it may have been easier to give up hope, Mike insists, “God and family remained the two most important things in my life.”

“Maybe that’s why I have my son…maybe that’s why Brian was born; because I was going to get sick and needed him to inspire me. He gave me a reason to get home. Otherwise, I don’t think I would have had the strength.”

Mike, who has transformed his challenges into encouragement for others, is determined to continue his experience to expand public awareness about Pompe. He would like to see an increase in newborn screening for Pompe and other Lysosomal Storage Disorders, and plans to continue taking steps forward towards regaining an independent lifestyle.

“The struggle is never over, I’ve reached this goal – coming home – but I don’t plan on stopping here. I have a lot of other goals; to walk again, drive, and get back to work.”

On October 18, 2012, Mike and Debbie celebrated their family’s new anniversary- the day he returned home.