Despite the immense challenges the family has faced with Katelynn’s illness, there is joy and love in every corner of every room in the house. 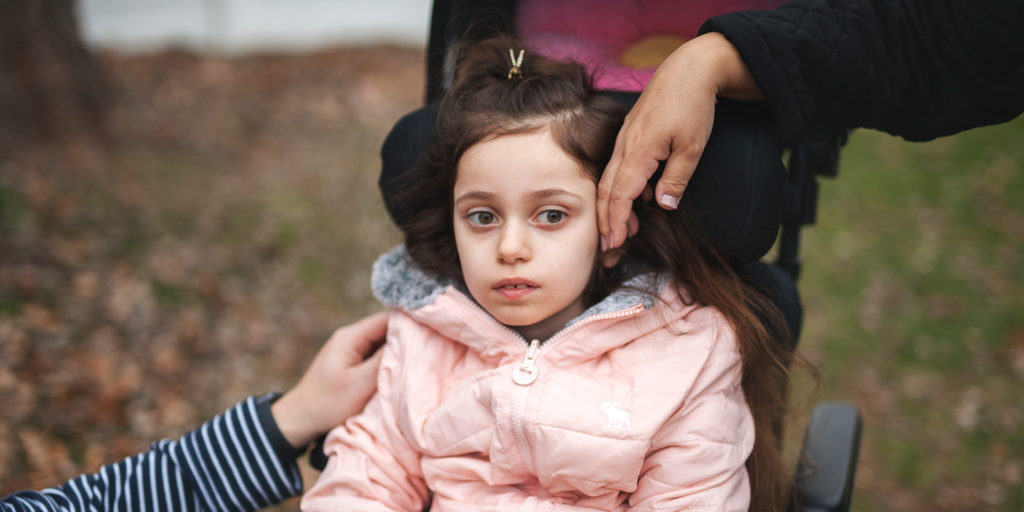 “Look!” says Ryan proudly, “Katelynn is holding my fingers!” He raises his hand high above Katelynn’s head. Ryan is Katelynn’s twelve-year-old older brother and her greatest admirer. His mouth breaks into a grin as he lowers her fingers and rests them on her lap. He kisses her on the forehead. “I love you, Katelynn.” In the kitchen, their father, Gary, is preparing his famous spaghetti and marinara sauce, while their mother, Kathy secures Katelynn in her stroller in preparation for feeding her dinner. Ryan hops over to the keyboard to play music that fills the house with pre-holiday cheer. Tonight its butternut squash soup for Katelynn. Kathy stirs a nutritional supplement into her bowl for extra calories. Feeding Katelynn soup, one spoonful at a time, takes at least an hour. “Open up!” says Kathy lovingly. Katelynn spots the spoons coming toward her and opens her mouth. Kathy uses a vibrating wand to tickle Katelynn’s nose and cheeks to help her remember to swallow. “She loves food,” says Gary. “Doctors have told us to get her a g-tube to make feeding her faster, but we don’t want to take away one of the only things Katelynn can still enjoy.”

Suddenly and without warning, Katelynn makes jerking movements. Her arms and legs stiffen, with one arm swinging back and forth in a rhythmic motion against the table. Kathy, Gary, and Ryan drop what they are doing. “She’s having a seizure,” Gary says quietly. The family surrounds Katelynn; all three of them stroke her arms, lightly touch her back and gently combing their fingers through her hair. Kathy whispers, “You’re okay. You’re okay. We are all right here with you. You are not alone.” The seizure lasts for a few minutes. When Katelynn’s limbs finally relax, her head falls to one side. “Now she’s tired,” Kathy says. She carries her to bed. Katelynn’s room is princess-themed, complete with pink walls and a white and gold headboard fit for a palace. Kathy tucks her princess in and kisses her head. 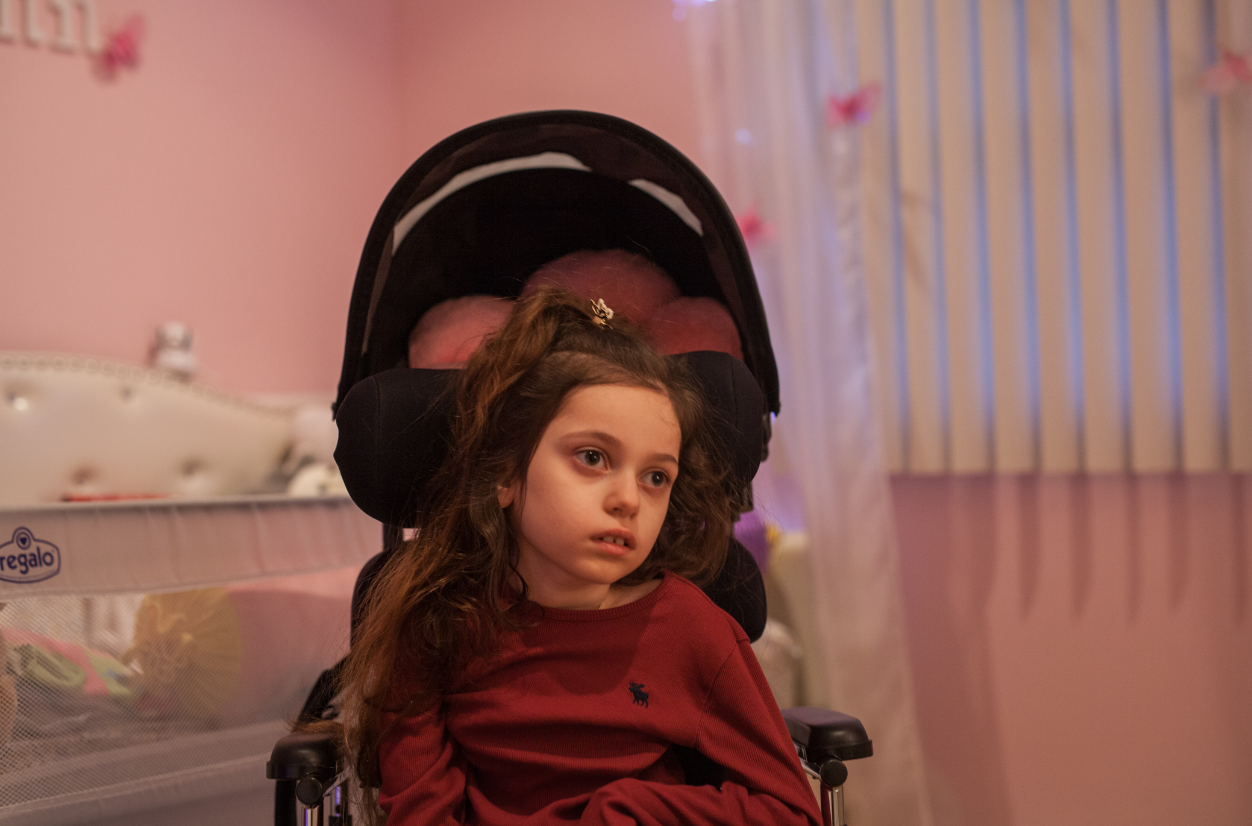 Katelynn was born with CDKL5 deficiency (cyclin-dependent kinase-like 5), a genetic disorder that causes lack of motor control and seizures that impair development. “We had no idea she had CDKL5 when she was born,” Kathy explains, “but when she was an infant she made strange movements with her arms and I knew they didn’t look normal. She would sort of raise her arms and legs, and her face would turn red until she stopped breathing.” When Katelynn was first brought to the local ER, the doctors doubted there was anything wrong with her. But Kathy and Gary persisted. They took her to a neurologist who ordered an EEG, which confirmed that Katelynn was having seizures, lots of them. She was eight weeks old.

“We were terrified,” says Gary. “Katelynn was having seizures a few times a day.” Suddenly their lives were turned upside down–– Katelynn was thrust into a world of never-ending medical tests: lumbar punctures, MRI’s, spinal taps, sedation, intubation. “They could not figure out what it was. All the tests kept coming back normal. The doctors wondered whether it could be her food.” In any case, Katelynn was prescribed medication in an attempt to control the seizures. “The bad thing was that she required so much of it that she was sleeping 23 hours a day.” At this point, the doctors had no answer as to why Katelynn was prone to so many seizures. Kathy and Gary felt lost at sea.

“I simply wanted to know what was happening to my little girl and why,” remembers Kathy.

The first geneticist they met told them that he could probably find answers by running extensive tests on Katelynn’s blood, but he discouraged the family from doing so. “He told us the tests would cost thousands of dollars and whatever disease he would find would not be curable anyway, so why spend the time and money?”

“It was at that point we realized we needed to go to a major children’s hospital,” Gary says. They had read that Boston was number one in the country and they made an appointment. They found the staff there warm and welcoming. The geneticist told them he’d be able to quickly figure out Katelynn’s diagnosis and he agreed that they should know what Katelynn had, that they’d be better off knowing what her illness was. “He told us he was going to give us news we didn’t want to hear, but that we’d be better informed to choose the right meds and the right treatments.” This approach fit well with Kathy’s and Gary’s hopes and goals for Katelynn. “It made sense to us. We always want the best for her.”

A few months later, Kathy got the call. “I was at my parents’ house. Gary was on his way home. The doctor said, ‘I got results and I think you should be sitting down’. He told me Katelynn had a rare disorder called CDKL5. I dropped to the floor and was crying because I knew what CDKL5 was. I had researched all of the possible diagnoses and I knew CDKL5 was devastating. ‘’She’s not gonna have a chance at life,’ I sobbed. I had been secretly hoping whatever she had was curable and fixable. I now knew what her future was gonna be.’”

The multiple hospital stays took their toll on little Ryan, whose family was constantly being separated by Katelynn’s medical needs. “Ryan was 4 or 5 at the height of Katelynn’s hospital stays. He often stayed with his grandparents, who have been instrumental in helping us get through all of this. “I was little and I wanted my parents,” Ryan says. “Sometimes I was at my grandparents for a month and I was always scared that my sister was going to die.” One thing that helps Ryan is a club called “Sibling Shops”, where siblings to kids with disabilities come for 2-3 hours at a time and play games, eat and talk about hardships. “You can talk about things that are bottled up inside. You can talk about anger or about other people who think we have it just as easy as they do.

At one point, the family experienced a period of relative calm and peace. Her treatments started providing Katelynn with total seizure control. Katelynn also qualified to work intensely with physical therapists in order to gain skills she had never before been able to master due to the interference of seizures. “For the first time,” explains Gary, “she was sipping from a straw, holding her own bottle, eating more solid foods. She was even sitting up for periods of twenty minutes at a time, unattended!”

Unfortunately, one week into this seemingly miraculous period, Katelynn went into status epilepticus—she started having violent seizures, one on top of another that wouldn’t let up. Katelynn needed medical intervention urgently and Gary made a decision to drive straight to the ER where he had recently learned about an excellent doctor from another family who had a kid with CDKL5. “I drove in my truck literally as fast I could drive. Katelynn was seizing over and over the entire time. It was the absolute worst because we didn’t know if we would ever bring her home.” Once in the hands of medical care, Katelynn was put into a coma twice to stop the seizures. The doctor wanted to perform a tracheotomy, but Kathy and Gary refused. They insisted would she pull through without one. “She’s a tough girl,” Gary said. “She can handle it.”

Katelynn survived, but all the progress she had made with her physical therapists was lost. She was never able to regain any of the skills like sitting up and holding her bottle. “The physical therapists made us a video, though, of her progress. “It’s hard,” Kathy chimes in, “to remember what she could do. Like even now, she’s in a period of many seizures so she’s not even able to smile. She hasn’t smiled in three weeks. Usually she smiles all the time. That’s what she’s known for!”

Despite the immense challenges the family has faced with Katelynn’s illness, there is joy and love in every corner of every room in the house. They laugh together at the photographs of Katelynn in her elaborate, handmade Halloween costumes. Excitedly, they speak of their Make-A-Wish trip to Disney World, where Katelynn was able to enjoy two days at a park that was set up for kids in wheelchairs and in need of medical care. Kathy and Gary are proud of Katelynn’s experiences at school, which she attends full days from 8-3. When not having seizures, she has been having consistent success with a device called Toby, which is helping her to communicate through movements of her eyes.

A high-pitched cry comes from Katelynn’s room. She has woken up from her sleep and Gary carries her into the living room. “Hi Sweetie!” says Kathy. Gary places her gently on Kathy’s lap and the family settles into the couch with ease and comfort in their affection for each other. “She’s a great cuddler,” says Kathy, wrapping her arms around Katelynn. “Ryan likes to cuddle her so much that sometimes if you take her away from him, he’ll protest saying, ‘But I just got her!’” Ryan laughs at this idea and reaches for Katelynn’s hand. “She can feel that I am here,” he says. “Even if she can’t talk or walk. She knows that I am here and that is all that matters.”