Finding ways to help themselves and Hudson are crucial tactics for staying afloat in what can be a perilous balancing act. 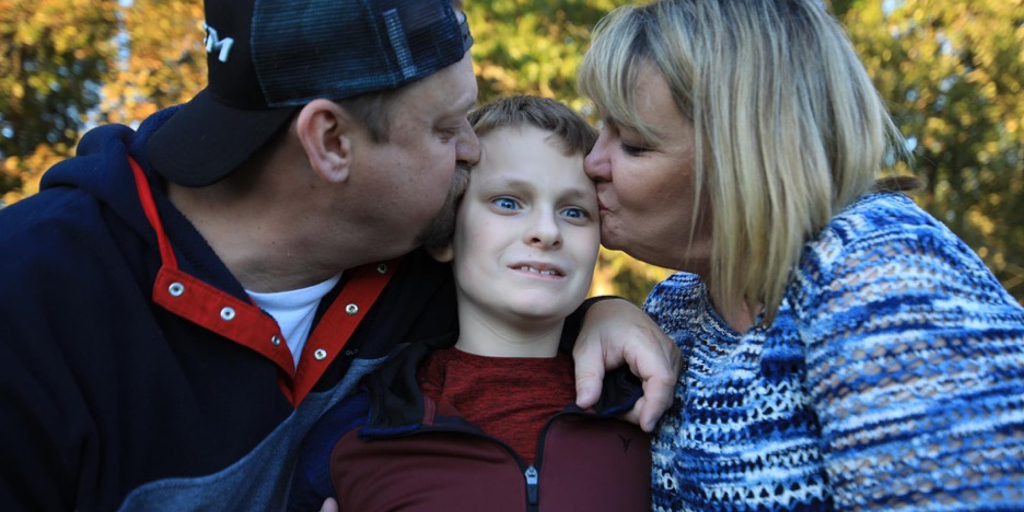 Within a minute of sitting down at the kitchen table, Amy’s phone rings. It’s the school nurse. “I hope it’s not another seizure,” says Eddie, her husband, hands clasped together, staring downward. Their facial expressions quickly transition from the “welcome-to-our-home” smiles, to looks of doubt and worry. The nurse confirms their fears that Hudson, their youngest son, had a seizure at school.

“We’ll be up to get him,” says Amy before she hangs up—a note of acquiescence in her voice. Eddie lifts himself and grabs the car keys. Luckily the school is less than 15 minutes away. “Well, this is how it goes,” he quips as he heads out the door.

Hudson’s seizures are a relatively new chapter in his experience living with Batten disease, CLN3, a degenerative neurometabolic disorder that progressively causes severe neurological symptoms including blindness and seizures. Hudson has been mostly blind, though he’s retained some peripheral vision (his “sweet spot”), for the past five years, but didn’t have his first seizure until six months ago, at the age of nine.

Amy’s eyes wander around the room in contemplation. As Hudson’s mother, she has often gone into “warrior-mode” to find answers and protect her son, especially since his diagnosis in January of 2015. “After a seizure like this, he’s going to be really out of it. He loses his bearings. He’ll bang into walls. He gets very frustrated.” Her unwavering focus and support for Hudson’s day-to-day needs is astounding: maintaining a full-time job, spending time with Eddie, her older son Grant and caring for two dogs, all while exuding gracious warmth and down-home hospitality. 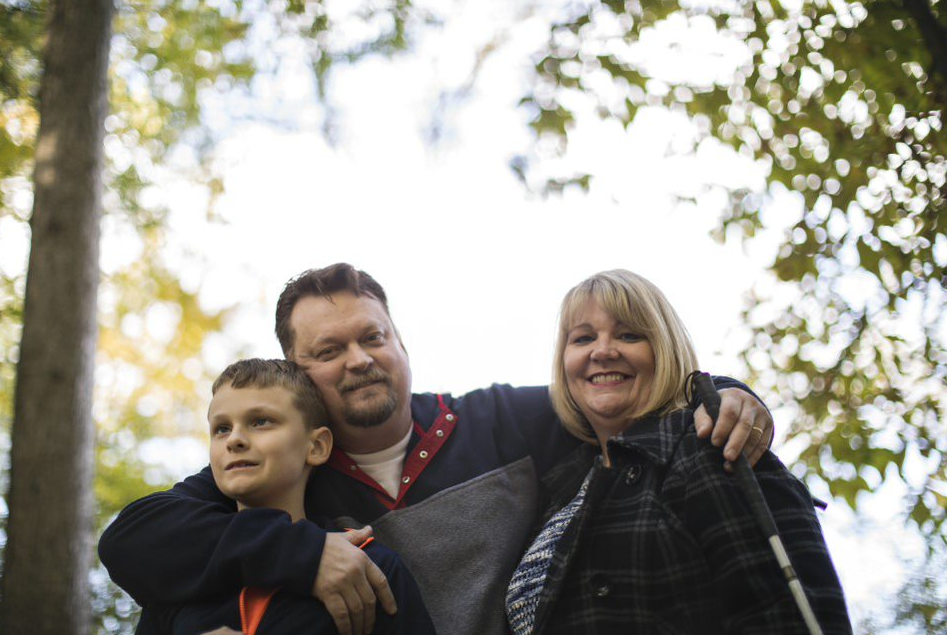 Hudson soon returns from school in a defeated state. He yells and sobs as Eddie tries to coax him upstairs to take a nap, hoping it will lessen the negative effects of the seizure. Amy has been searching abundantly, thumbing through volumes of research and resources on Batten disease, to come up with strategies to ameliorate Hudson’s situation. His diet has been a major focus.

A quick look around the family’s home in the quaint countryside outside of Columbus, Ohio, reveals this devotion. Hudson’s house is laden with an array of musical instruments, set in different rooms, waiting for inspired fingers to dance out new melodies — Hudson loves to play them all.

For Eddie, these instruments provide an outlet for creativity with Hudson. Far from the difficulties of living in a world designed for the fully-sighted, the comfort and natural ease of music is a welcomed universe for Hudson. “That’s our main connection,” says Eddie. “I’ll play bass, while he jams on the drums.” Together, they search for the right rhythm and tone to ease what, at times, can be a cacophonous affair.

Already in their mid-30s, the couple didn’t waste any time starting a family. First Grant was born, and then three years later, Hudson came along. “Hudson was born a big, healthy baby,” says Amy. “But he was fussy.” As Hudson grew, he became increasingly agitated, throwing fits and tantrums incessantly. “We didn’t just have terrible twos,” remembers Amy. “It was a nightmare. We had to tag-team. He would scream and cry and hit and kick and try to bite and scratch. It was exhausting.”

Once the family moved into their full-sized house, Hudson’s attitude seemed to improve, but soon his eyesight began failing. “That’s when we noticed he was going blind,” says Amy. “In his preschool class he was falling behind in terms of letter recognition. The daycare thought that he maybe had ADHD, or that he was on the autism spectrum. We had noticed that he always sat close to the TV, but a lot of kids do at that age.” Hudson visited an ophthalmologist, who prescribed glasses to correct his 20/200 vision to 20/40. But Hudson only enjoyed decent sight for a brief moment. “Eight months later he was 20/400 to 20/1600,” says Amy.

At that point, we didn’t bother with glasses anymore.

Amy began researching what could cause such sudden-onset blindness in a young child. “I was thinking no way,” recalls Amy, when she first read the description of Batten disease. However, Hudson was soon referred to a neurologist who did numerous blood tests, resulting in the diagnosis of CLN3, a juvenile form of Batten disease. Faced with a terminal diagnosis, with no available treatments or cure, Hudson and his family did their best to digest this stark reality—a process that is still ongoing.

Hudson rises to his feet again, but it seems the ill after-effects of his seizure today are continuing to plague him. He plops down on the couch and Eddie switches on the TV. Before Eddie can settle Hudson in, he’s begun vomiting on the floor. Unfazed, Eddie grabs paper towels to clean up, while consoling Hudson. Tears continue to streak down his cheek. “I want medicine!” he shouts. Eddie rushes to the cabinet to get some vitamins and Tylenol.

“The behavioral stuff is the most underreported. It’s the most awful little secret that the Batten parents have to deal with,” explains Amy, referring to Hudson’s erratic, inappropriate, and sometimes violent behavior. The combative nature and need for constant attention has brought undue stress to the household at times. “When we get home, we’re spent and tired. We just wanna relax or get something done around the house, but Hudson requires nonstop attention.” To assuage some of the tension, Eddie and Amy recently hired an aide. “She is a saint!” declares Amy. “That has been one of the best things we’ve done recently,” says Eddie. “I was talking with a couple buddies at the [Batten Disease Support and Research Association (BDRSA)] conference…having that added support pretty much saved one of their marriages.”

Finding ways to help themselves and Hudson are crucial tactics for staying afloat in what can be a perilous balancing act. Going to BDSRA conferences has been inspirational, allowing each member of the family to learn more about the condition and connect with peers. Grant has been very active in the sibling group at the BDSRA. Eddie and Amy see these as important stepping stones to fostering more connection between the brothers. “I see Grant stepping up to facilitate the siblings’ group,” says Eddie optimistically.

Furthermore, supporting Hudson’s passions, have become a central focus for the family. “If it was up to Hudson, we’d be traveling all the time,” says Amy. “One of his goals is to visit all 50 states.” On their dining room table lies a 3D, topographical map of the United States—each state a separate piece that can be removed. “He can recognize each state by its shape,” she continues. So far the family has taken several trips toward Hudson’s goal, including Alaska and Hawaii. “It’s a stretch for us financially,” says Eddie, “but it’s worth it.”

This sheds light on Hudson’s natural intelligence which contradicts the decline of other faculties. Hudson taught himself braille quite quickly, and now takes great joy in reading and writing. “He wants to be an author,” reports Eddie. Amy brings out his brailler, a simple, six-button typewriter that speaks the letters back to you. “He knows both contracted and uncontracted braille,” she says. She also shows off the various books that he’s written. “He absolutely loves books. He loves the smell of a new book.”

Hudson begins to emerge from the post-seizure cloud that’s engulfed him for the last few hours wondering how he got to the living room sofa. “Daddy picked you up from school Hudson. You had a seizure today,” says Amy. Confusion aside, getting some fresh air suits Hudson well. The family takes him to a local farm to buy this year’s soon-to-be jack-o-lanterns. Tracing his hands over the bulging form of the pumpkins, Hudson identifies his favorite. “This one. Let’s get this one!” The real joy, for Hudson, is to experience some of the baby farm animals. He gently reaches out as baby goats quickly devour food from his hand, their darting tongues tickling his palm.

Throughout Hudson’s trials, he rarely complains. “He is so adaptive,” observes Amy. “Even though he’s lost his vision, he will never blame anything on it.” Hudson’s abilities, his intelligence, and his love are all driving forces keeping his family on the path toward hope. “When we first got the diagnosis,” says Amy. “I refused to believe that this was Hudson’s fate. I didn’t believe it for a second.” They all look toward new clinical trials for CLN3 treatments, as well as the hope for a more accepting and congenial world for Hudson to be a part of. “It’s taught me a lot about compassion,” reflects Eddie. “Now I know what other families go through. I say hi to those parents. I understand a lot better how to treat people who face different challenges.”

1 In English Braille there are a number of contractions that, much like stenotype or shorthand, do not require the full set of characters to spell out a word. It is also known as “grade 2” braille.